Last night my BFF, her oldest daughter and my two daughters went to the Taylor Swift concert in Detroit, MI. We purchased our tickets well before Christmas and our girls literally counted the days down until our Taylor experience. She played to the sold-out Ford Field of 50,000 people, most of whom were tween girls with their mom’s and/or dad’s. She didn’t disappoint her loyal fans. Her concert was more than a concert. It was a spectacular production complete with lights, dancers, multiple wardrobe changes and fireworks.

My daughters (and me too) had a blast at the concert. The girls sang along to all of Taylor’s songs, danced in their seats, and screamed. Let me tell you, 50,000 screaming girls is LOUD!!! Taylor sang hit songs from her previous albums like “You Belong With Me” and “Mean,” but mostly sang from her “Red” album, which we’ve faithfully listened to since its release. My oldest daughter was in Taylor heaven. She smiled non-stop for the entire two and a half hour production.

For being in a stadium the sound was pretty good and our seats weren’t bad. Granted Taylor looked like a teeny, tiny ant on the stage, the huge video screens made her look larger than life. Midway through the concert she moved to a smaller stage in the middle of the stadium and we could see her really well. Our daughters swooned. She sang three or four songs from this closer stage include a duet with Ed Sheeran, whom my 6-year old deemed “hot.” Taylor moved back to the main stage and played her current hit “Trouble” and “22” and ended the night with “We Are Never Getting Back Together.” We won’t soon forget our Taylor experience.

However, while Taylor Swift was awesome, the other aspects of our concert weekend weren’t so great. We checked into our hotel at 3:00 PM to change clothes. At 3:30 PM we were ready to head for an early dinner. On our way out, the manager stopped to let us know he’d had a complaint about us. Apparently, someone was trying to sleep and the kids were being “too loud” and if we couldn’t keep it down, we’d be asked to leave. Now, I understand people sleeping at 11:00 at night, but 3:00 in the afternoon? The girls weren’t really being all that loud comparatively speaking. They weren’t even jumping on the bed or fighting with each other. Just laughing and being girls. This morning when we were chilling out at the pool, we heard from another woman that they’d been told they were too loud as well. I guess a group of senior citizens were in town for a car show. Our theory was they were trying to get a free room. Regardless, our experience at the Woodhaven Holiday Inn Express was less than stellar and we won’t stay there again.

Putting that ugliness behind us we had a wonderful supper at good old Bob Evans. We left Bob’s at 5:45 PM for a 20 minute drive to Ford Field – plenty of time to make the opening act at 6:30 PM – NOT! The freeway was a parking lot. It took us 30 minutes to go less than a mile. Once we finally made it to Ford Field parking was a nightmare.  We ended up walking several blocks – bad decision on my part to wear heels!  I took photos along the way just in case we needed them to find our way back to the car. So, we missed the entire first act., but we weren’t there to see the openers anyway:)

On arrival we decided to make a potty stop before heading to our seats. We waited in a long, long line for another 20 plus minutes for the bathroom. After about ten minutes I noticed they’d converted the men’s room into a women’s room for the concert. I thought that was pretty smart on the organizer’s part as the number of men were few. It wasn’t until we were almost to the front of the line that I realized there was only ONE stall. I don’t think said organizers were aware that women don’t use urinals. It would have been better to have left it a men’s room. Oh well, I guess it’s the thought that counts.

Our next wonderful experience was the t-shirt line. We promised the girls Taylor Swift t-shirts. Add another twenty minutes of waiting for two workers to sell shirts to the throngs. Mom’s held up various styles and sizes to their daughters as we all waited. My inner dialogue went something like: “Come on, lady! Couldn’t you have figured that out during the 20 minutes you were in line????? We know what we want so get out of our way!” Add on to that stress the fact that I couldn’t find my credit card. Lucky for me my BFF helped me out and got the girls their shirts and I found my card back in the hotel room. Now that we’d missed most of the second act, t-shirts and glow sticks in hand, we headed to our seats and were ready to rock with Taylor.

Overall, I give our Taylor Swift weekend two thumbs up. I’d go see her again if I had a chance. I’d just leave earlier, buy our t-shirts from her website beforehand, and make sure the bathroom line was for an actual women’s room! 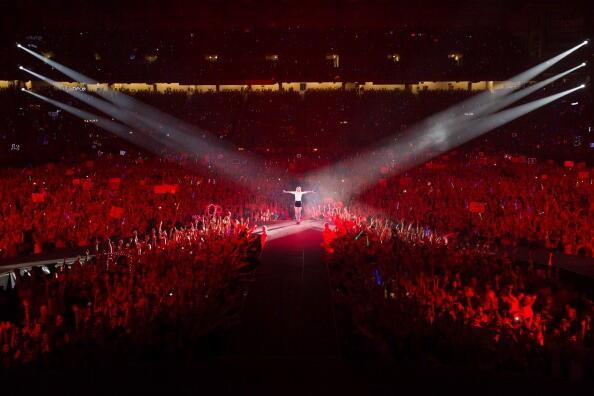