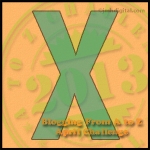 When I was ten years old, I’m slightly embarrassed to admit, Xanadu was one of my favorite movies. It starred Olivia Newton-John and I saw it at the drive-in. Ever since I ‘d seen her in the  movie, Grease (another favorite)  at the young age of eight, she was my hero. I wanted to be her or at least one of her characters. She could sing, dance, act and all the boys loved her. None of those things were true about me, but it didn’t stop me from pretending.

I actually had the soundtracks to both movies. I played the 33 on my record player over and over and over (my poor Mom!). I knew all the lyrics to the all the songs (come on admit it, you did too! Oh alright then, it’s just me.) What’s even sadder is I still remember most of them. Come on sing along…“Xanadu. Now you are here. In Xanadu….” or how about “Summer lovin’, had me a blast…” or “Grease is the word that you heard…” Ha! Now you’ll have those cheesy songs stuck in your head the rest of the day! Worse, now I will too!

Thanks to Netflix and YouTube I’ve gotten to watch those old movies and hear those old songs as an adult. They aren’t quite as remarkable as I remembered them (although I do still have a soft spot for Grease, Xanadu on the other hand, not so much). The memories of how much pleasure those movies gave me back in the day, make me smile though. I wonder when my ten-year old dances and sings to the songs of Camp Rock, High School Musical and Hannah Montana if someday she’ll look back and think to herself, “I can’t believe I actually liked those movies! I knew all the lyrics to all the songs.”  And thanks to DirecTV and the Disney Channel, so do I!

What movies did you love as a kid, and cringe to think about watching now?

Anxiety has been a scary shadow lurking over me since I was a child, but it's not who I am. I've learned to talk back to my anxiety so that I can rise above my fears and speak (or write) my truth. #iamenough #anxietywarrior #riseadvocate View all posts by Sharlyn

What do you think? Cancel reply